Living with my husband can be downright frustrating at times.

He will do things his way and keep them like it for ages, I will suggest a better way for him to do things which he will instantly shut down. But then after a few months he will suggest the better way of doing things that I had mentioned previously. The best part, he will claim them as his own ideas?!

As a result, we’ve ended up with this blog post… A home office makeover, six months later than I had originally suggested it!

Wherever we have lived Alex has NEVER utilised his office space well. He has this weird thing where he doesn’t like his back to doors meaning that no matter the size or layout of the room, his desk has to be facing the door. This usually means his desk is bang in the middle of the room taking over the entire space, which of course is entirely impractical.

A few months ago I suggested moving his office around, to maximise the space and better utilise the layout of the room. ‘Move your desk against the wall and you will instantly open up the whole room’… His response ‘No thanks, not interested’.

To put it into perspective, his room is pictured below, before the makeover. It was messy, things were piled everywhere and it was a terrible use of space. He needed a home office makeover the moment he put this monstrosity together. 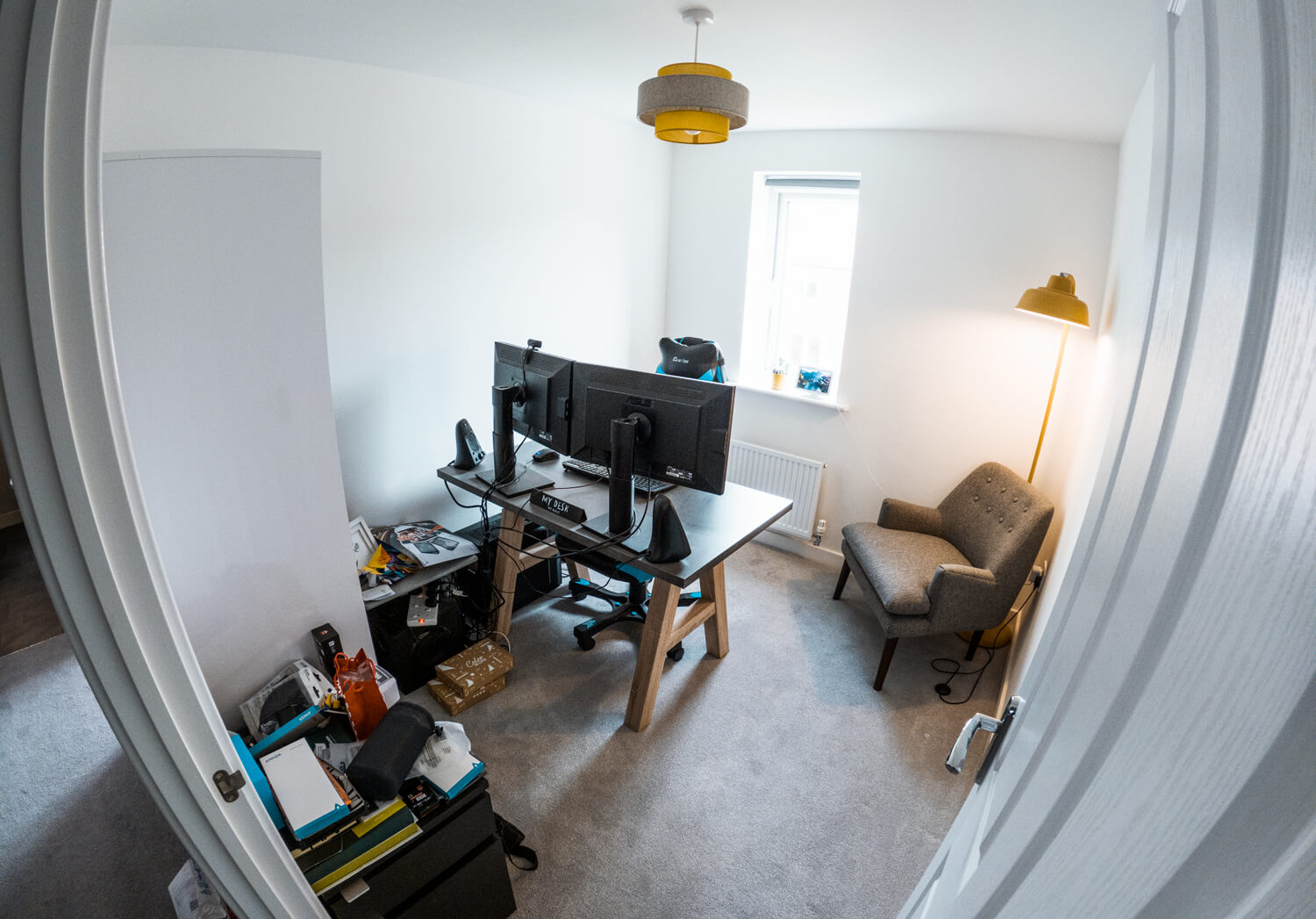 He was running out of space, so he came up with the idea to do a home office makeover. Usually when people plan things they take their time and mull over a few ideas,  but Alex was straight on the case by sending me out to buy paint and then got straight to work. When he gets a bee in his bonnet he usually has to act on it instantly, like he did when he helped out with the Wood Panelling in the lounge, kitchen and stairs.

His My Home Office Makeover

We wanted to create some contrast downstairs to break up all of the white walls and yellowing gloss. We chose a nice dark grey to cover the banisters, panelling up the stairs, skirting boards and the architraves around the doors. 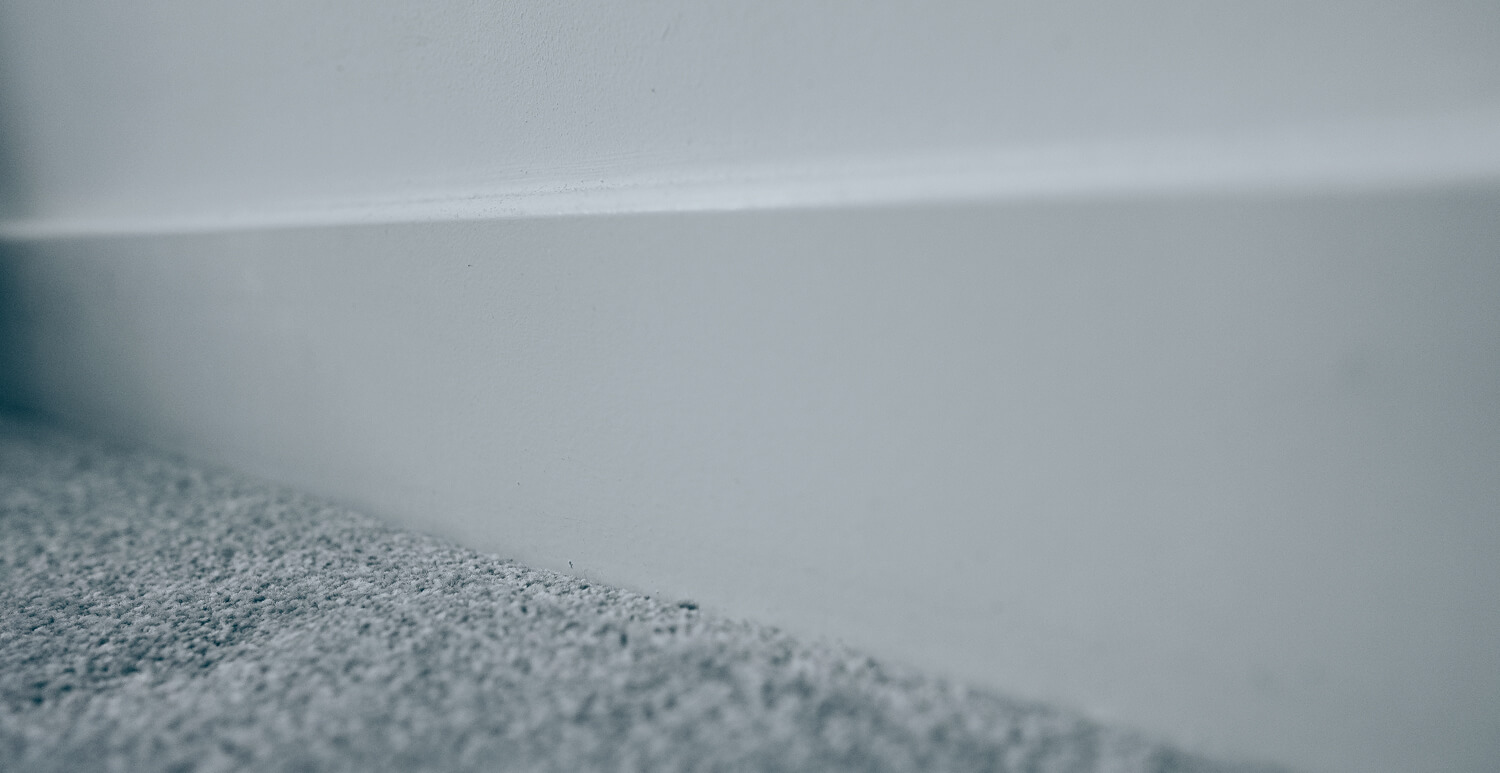 When Alex was planning his home office makeover, he wanted to continue the dark grey theme on the skirting boards, door frame and part of the wall in his room. 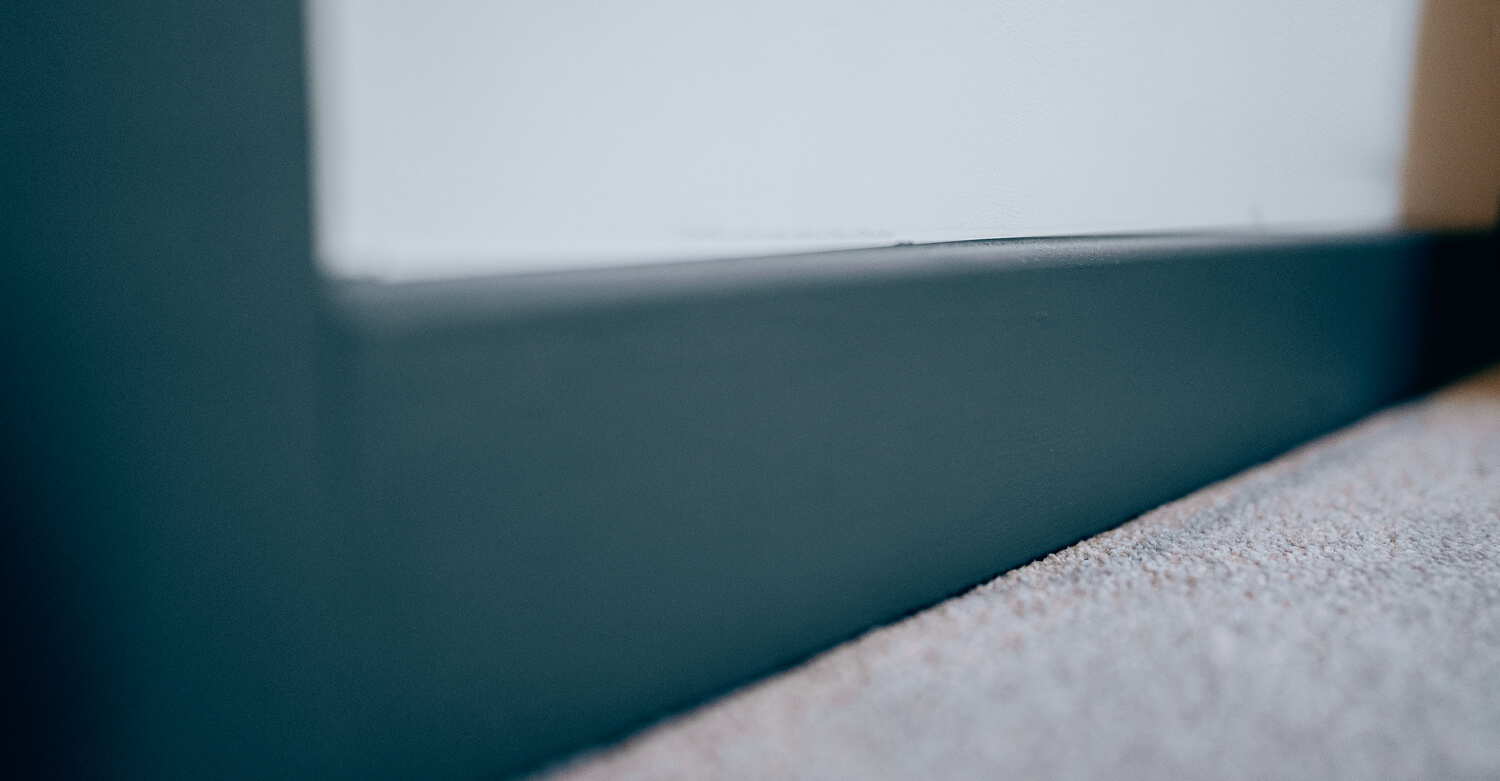 His favourite colour is yellow, and if it was down to Alex our entire house would have a yellow theme. It’s an acquired taste I know…

He settled on a feature wall, but instead of painting the whole wall one shade, he went the colour block route and incorporated yellow. 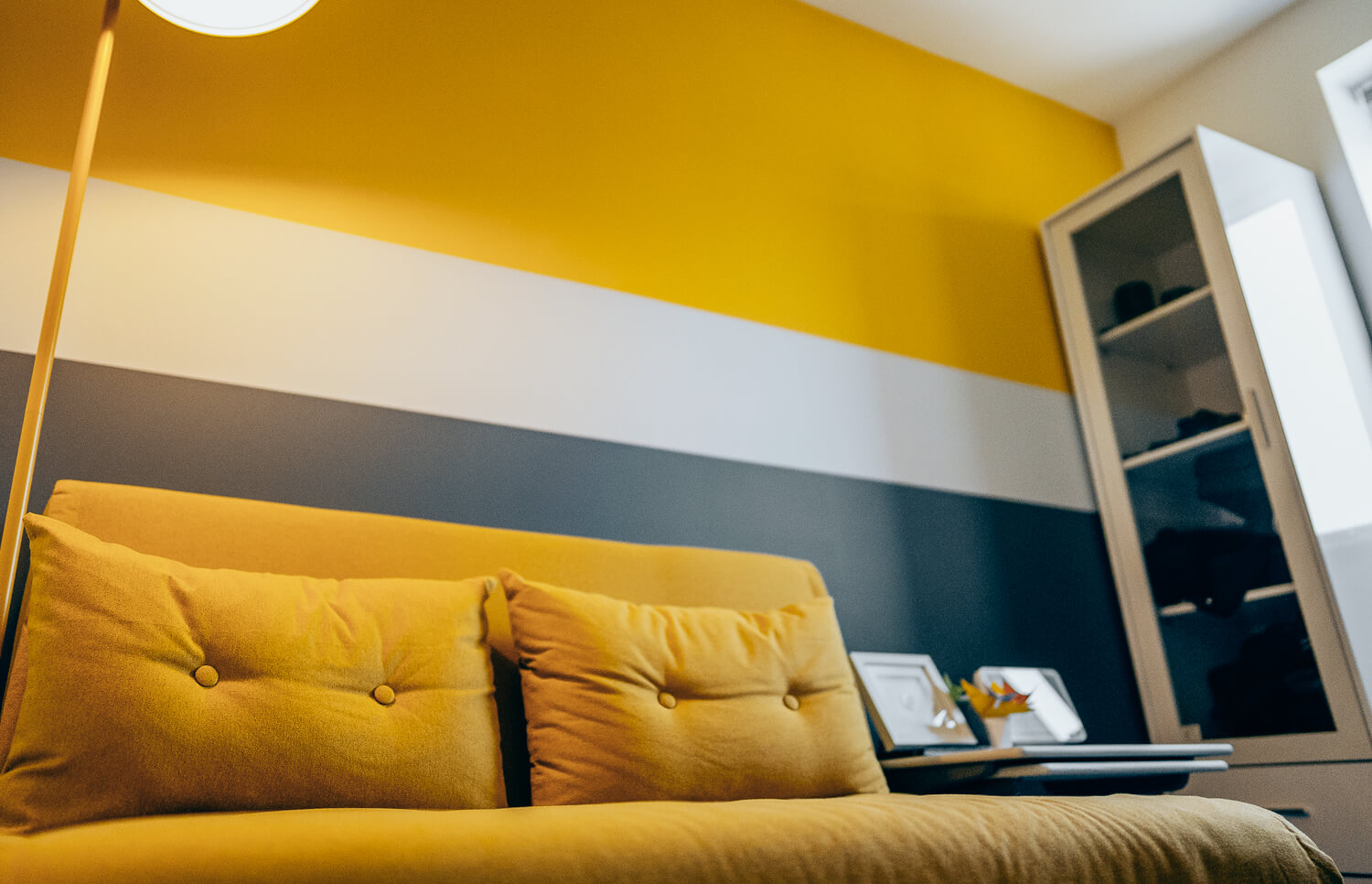 For the lighter grey we used Philadelphia Matt Emulsion, 2.5L tub from B&Q, which cost £14.

For the dark grey we used Carriage Wheel V700 from Valspar.

We had the dark grey paint left over from other house projects so we used up the last of it and bought another smaller tin to complete the job.. He painted the skirting, door frame and the bottom part of his feature wall and I personally love it when you blend the skirting to the wall. 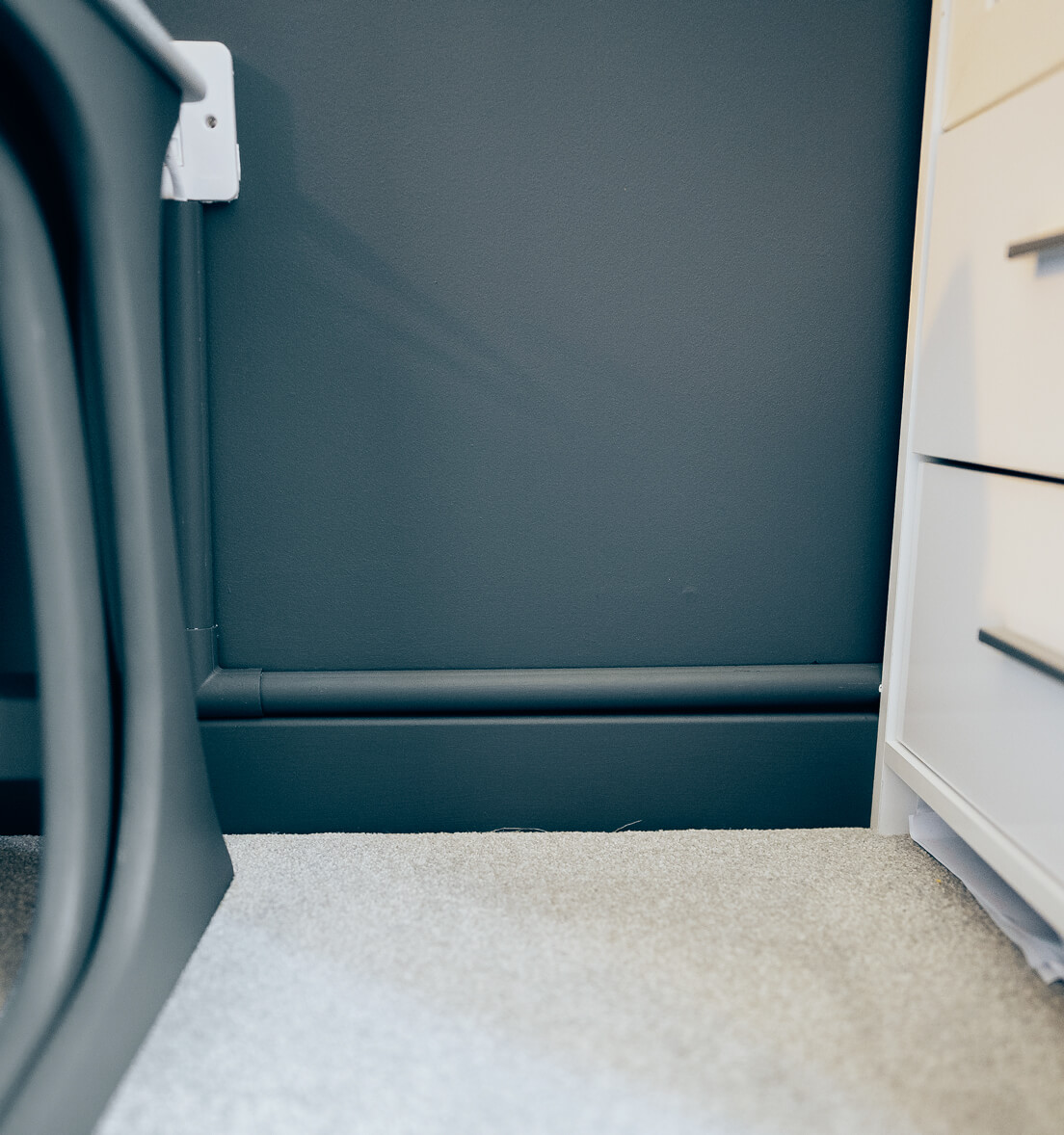 I must warn you though, if you decide to paint skirting which is not on hard flooring like laminate, tiles, marble etc, so basically anything other than carpet, then it could get messy if you don’t prepare it properly first.

First off, he hoovered the area where the carpet meets the skirting. Next he got a roll of just standard masking tape, but the 50mm wide tape. Have a look at this illustration he did which shows how he masked off the skirting and carpet ready for painting.

We also decided to upcycle an old nest of tables set that Alex got from his Grandad. He sanded them down and painted the legs the same dark grey as the skirting and walls and he painted the table tops the same lighter grey. 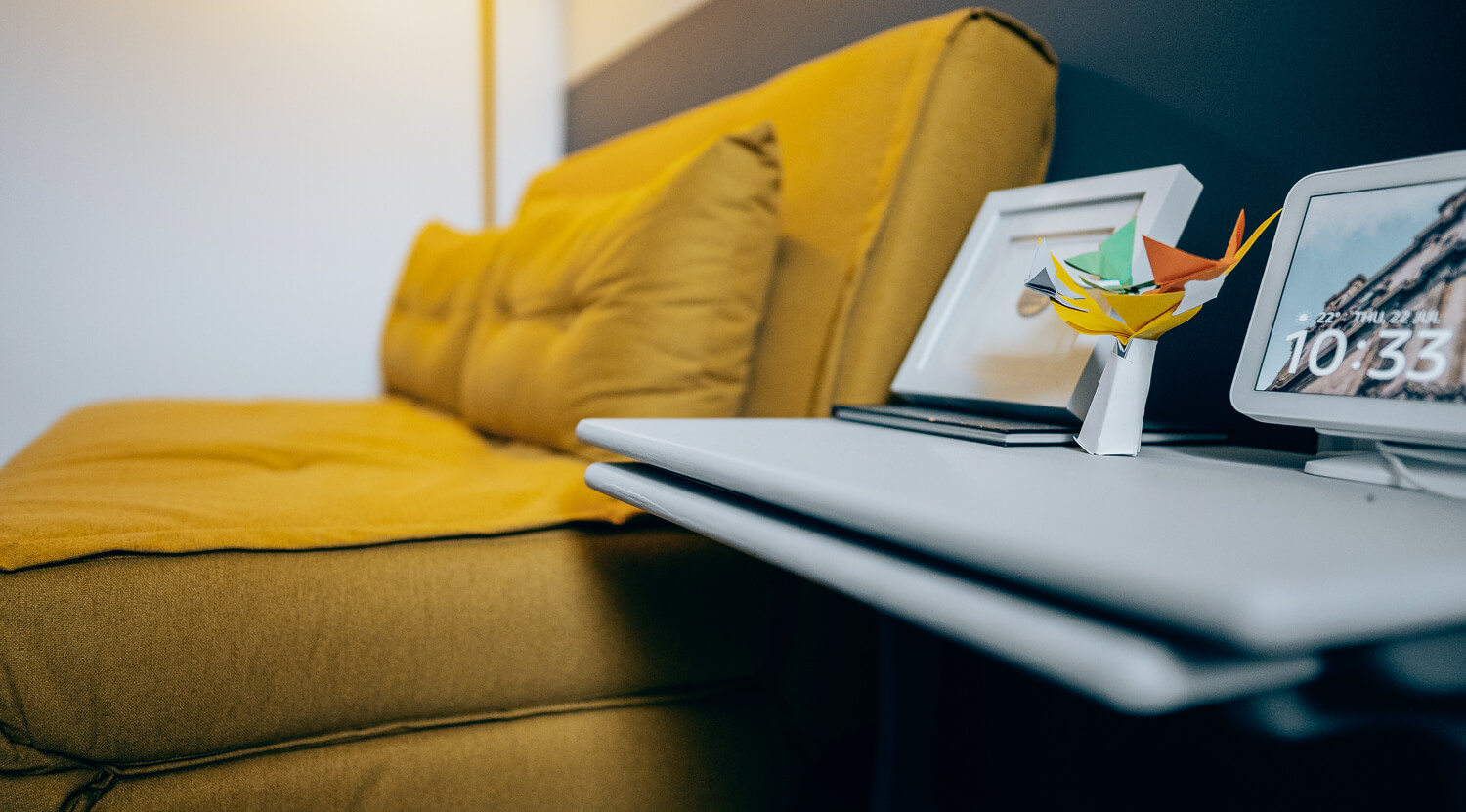 He already had the yellow floor lamp from before, which was a Habitat Benson Floor Lamp in Mustard from Argos which cost £30.

Having a sofa or sofa bed was something he never considered before and particularly so as he didn’t have the space! However after deciding on moving his desk to one of the walls, he quickly discovered how much more space he had…What a surprise. 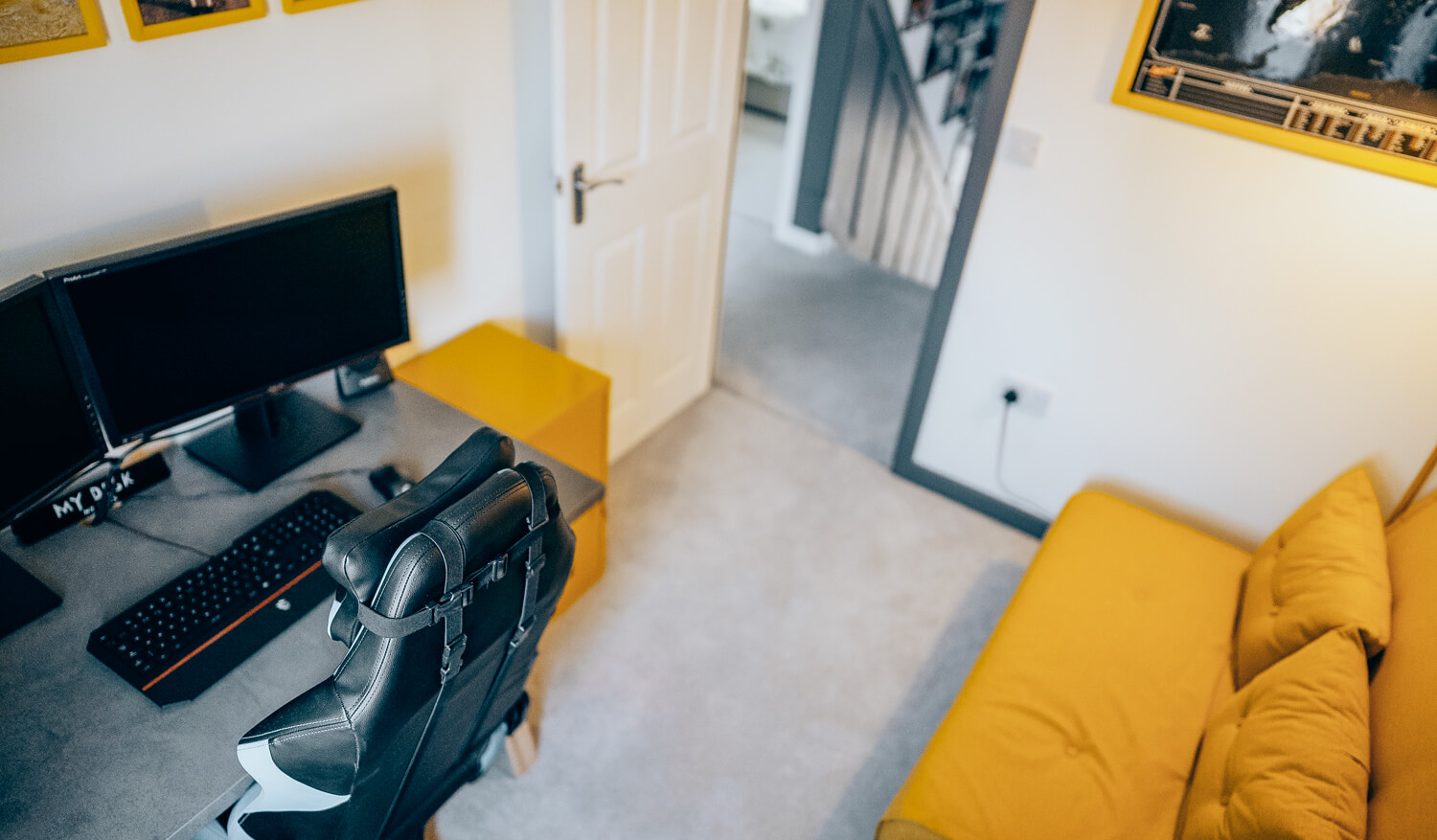 He obviously wanted something in keeping with his yellow theme and the first thing he found was this Haru Small Sofa Bed, in Butter Yellow from made.com . At £329 it wasn’t cheap, but after looking for alternatives, he couldn’t find anything he liked as much. When he ordered it, it was £299 though and while he was waiting for delivery they put the price up to £329. 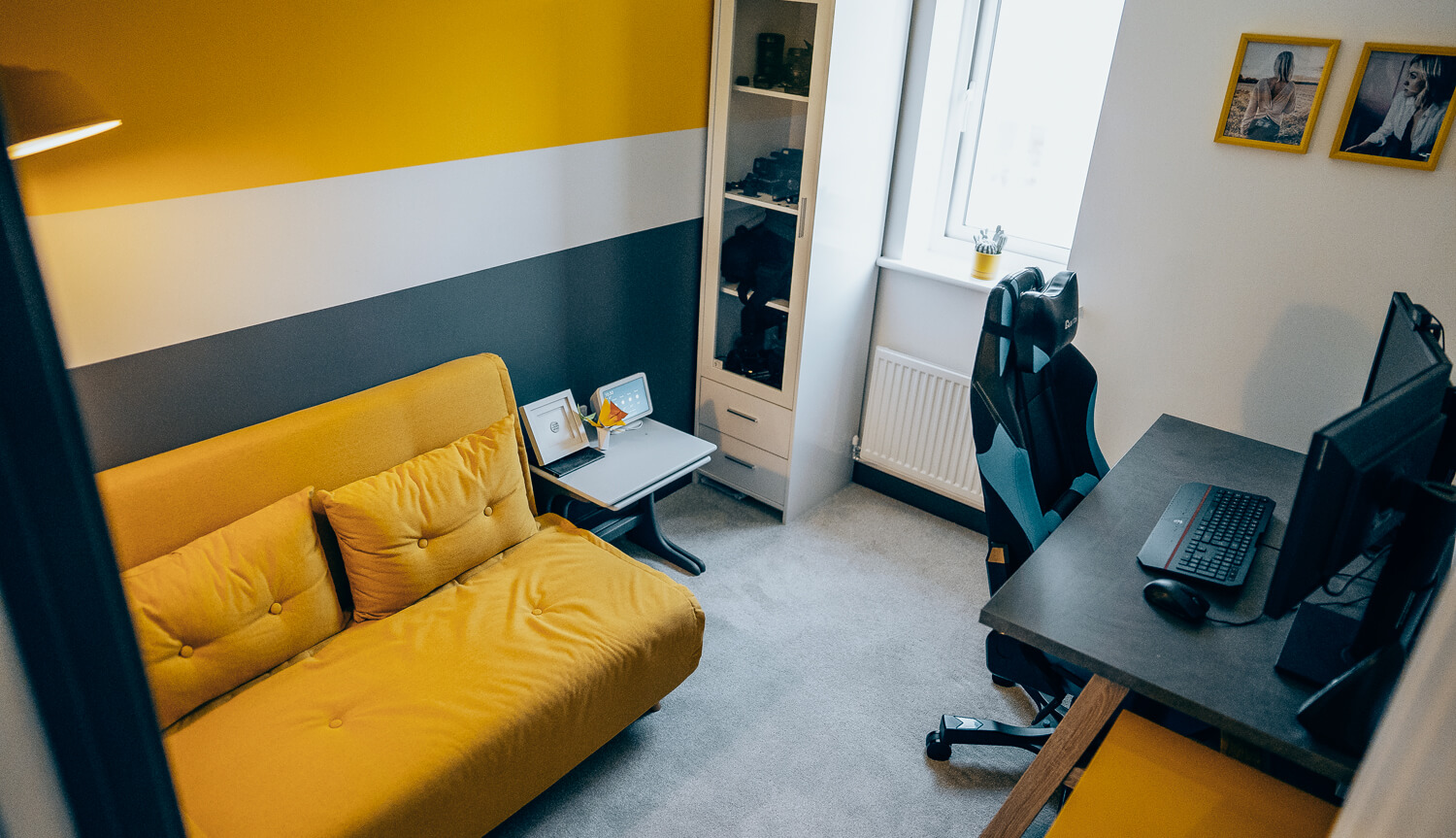 It is the perfect size for the space and there is still plenty of room when it is fully folded out.

He used to have an old black Ikea filing cabinet, and of course this didn’t match the look he was going for so he went on the hunt for something that was more in keeping.

He settled on this Pierre Henry 2 drawer A4 metal filing cabinet in mustard for £49.99, which obviously matched his yellow theme.

The glass cabinet was already in his room as it’s where he houses all of his camera equipment. As the unit is white it fits in quite easily and I think even he knew that he couldn’t go as far as painting that yellow.

About three years ago I bought Alex a map of the world where you scratch off places that you have visited revealing a very colourful map. He hasn’t wasn’t to put it up until now because he didn’t have the right spot for it. 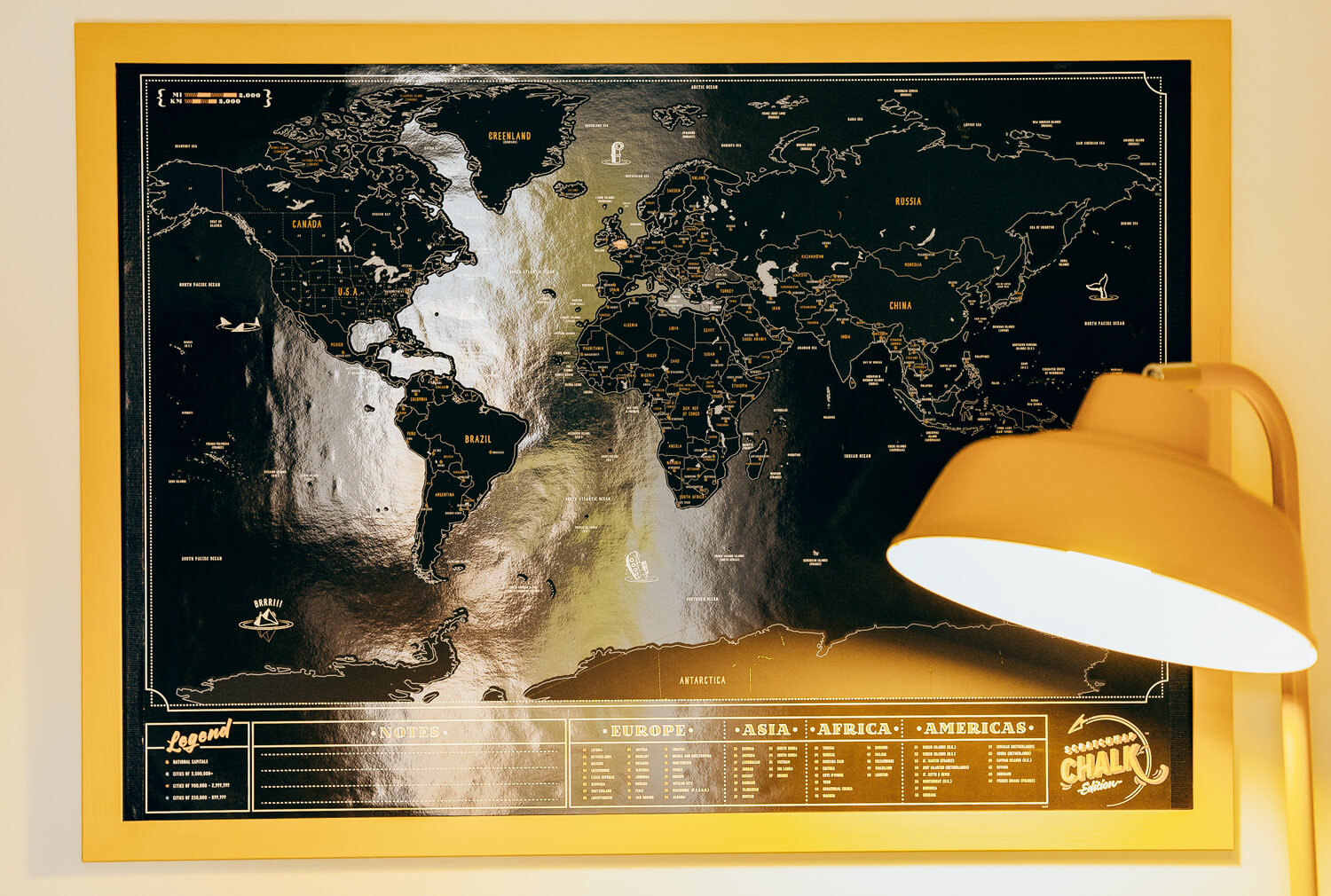 The map is quite large and he needed an A1 frame finished in yellow. Most of the frames he came across in yellow were either expensive or not quite the right shade so he settle on this A1 oak frame from Amazon for £16.99. 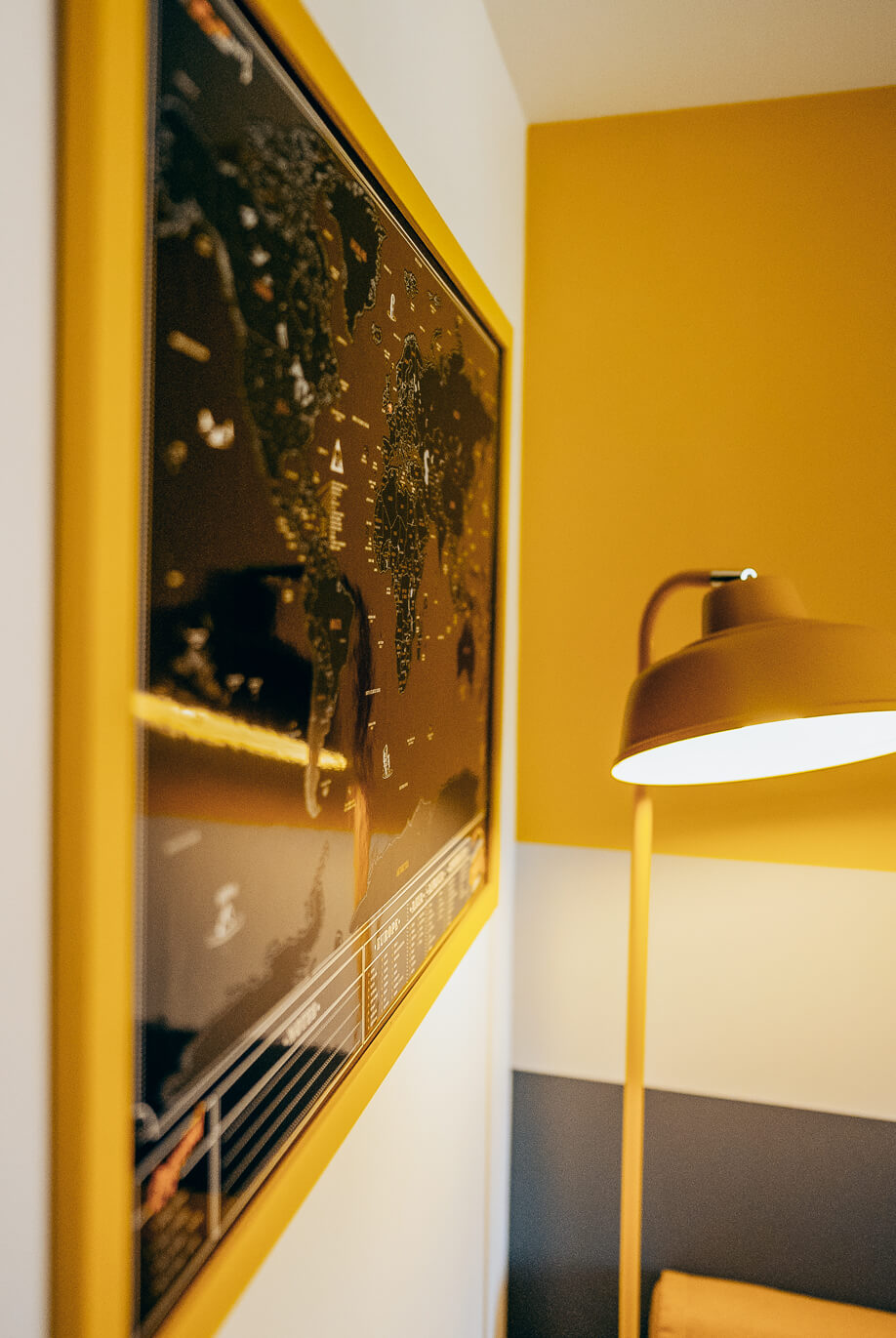 Obviously the oak finish is not what he wanted, so he used the Grand Via yellow wall paint, removed the glass and painted the frame with 3 coats.

The final part to his home office makeover was he wanted to have some pictures on the wall. Once again he couldn’t find exactly what he wanted in yellow as everything he could find was quite expensive and he needed 10 frames in total.

So he settled on these wood effect photo frames, 8 x 10″ from the Works, which cost him £3 each, although the price has since gone up to £5 now. As with the A1 frame a wood finish is not what he wanted, so he used the Grand Via yellow wall paint, removed the glass and painted the frames 3 coats each. 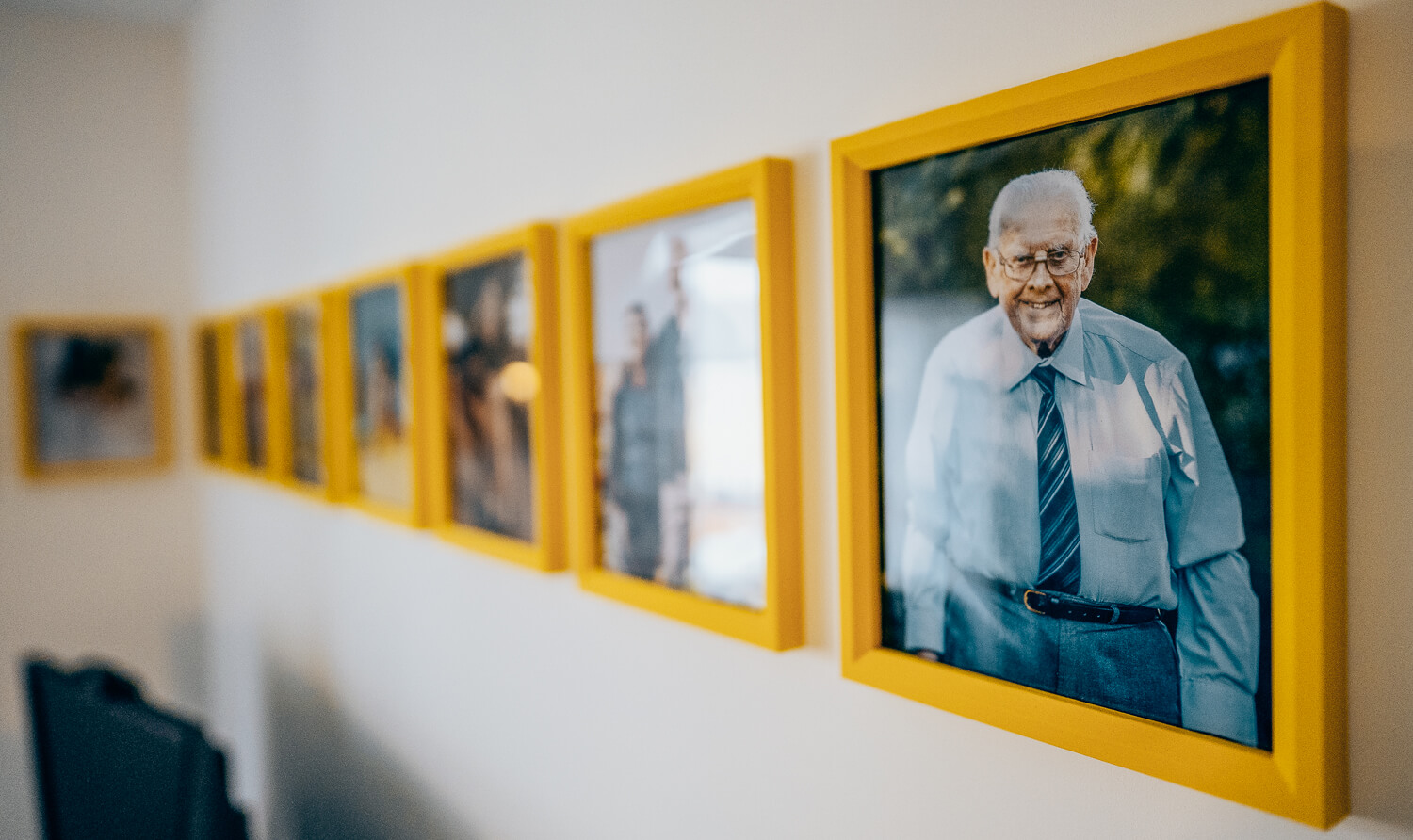 This gave him the exact finish he wanted but he said it was a painful process as the frames had a waxy type surface and the paint kept running off. He tried to sand down one of the frames to see if that would work but he unfortunately ended up damaging one. 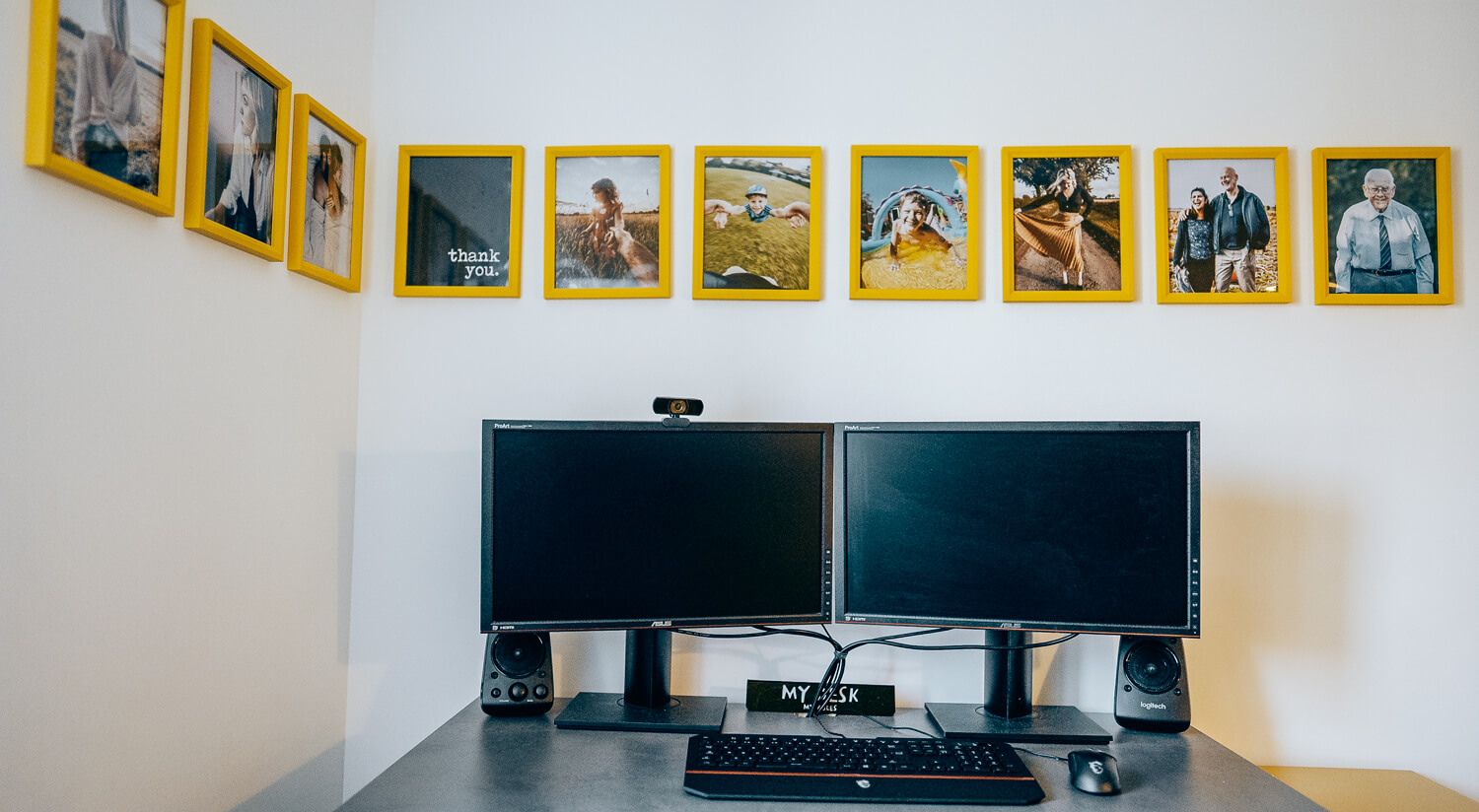 So he needed 3 coats which gave the perfect finish. Just in case you are wondering why one of the pictures says ‘thank you’, this is his wall of appreciation and each one of those photos is someone who has helped him get to where he is. It was the number 1 thing he was adamant he wanted when planning his home office makeover, almost motivation if you will.

Obviously makeovers can be simply a lick of paint and moving things around, but he now finally has a useable space, that is clutter free and vibrant and exactly the kind of space he wanted in the beginning.

He took his time getting there, but the difference is amazing. Plus having his room this way round finally means that I am no longer catching my hips and thighs on the corner of his desk like I have been doing for years when hoovering! 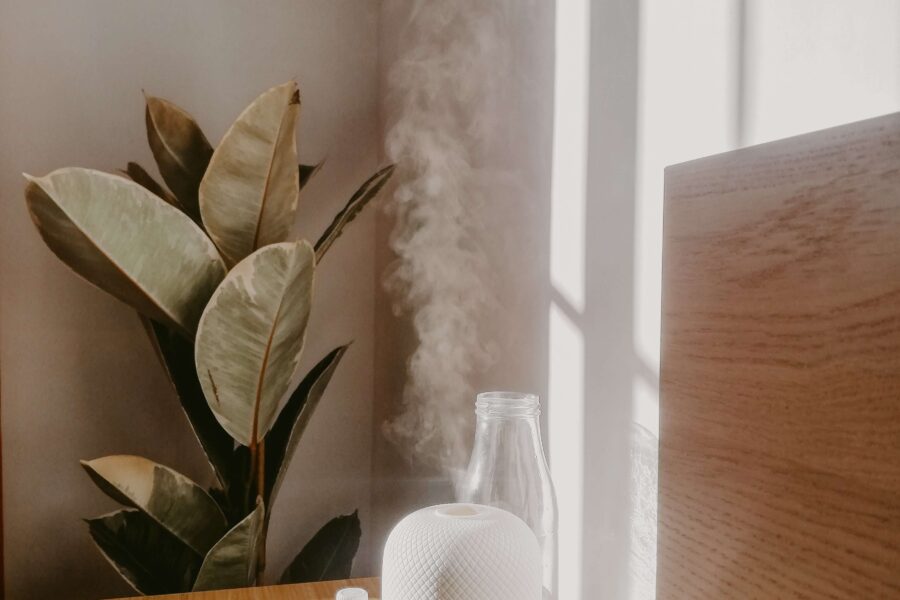 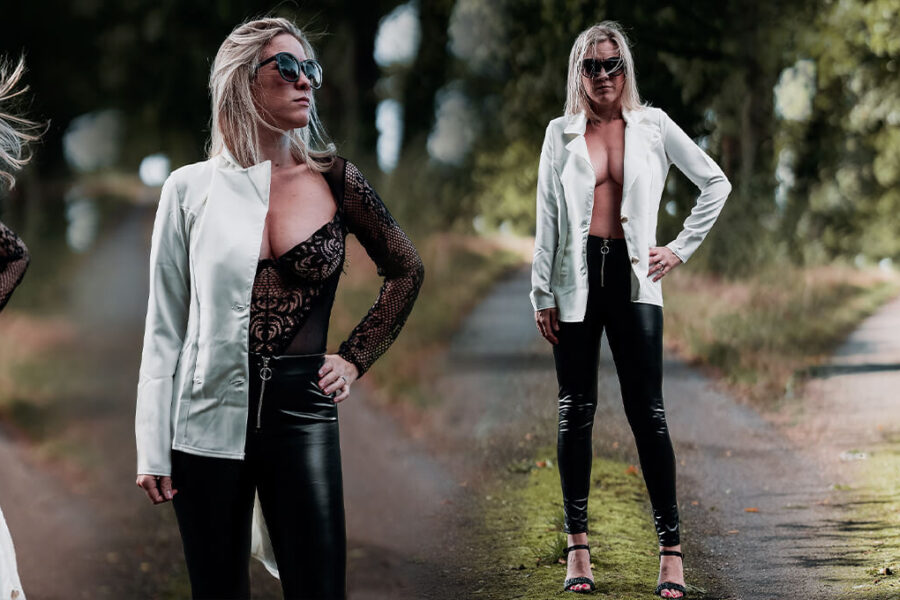 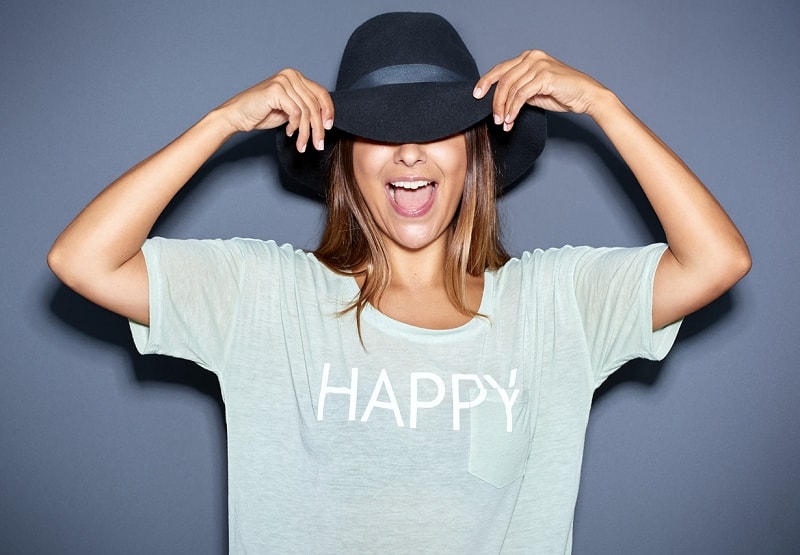 T-shirt styling for your capsule wardrobe 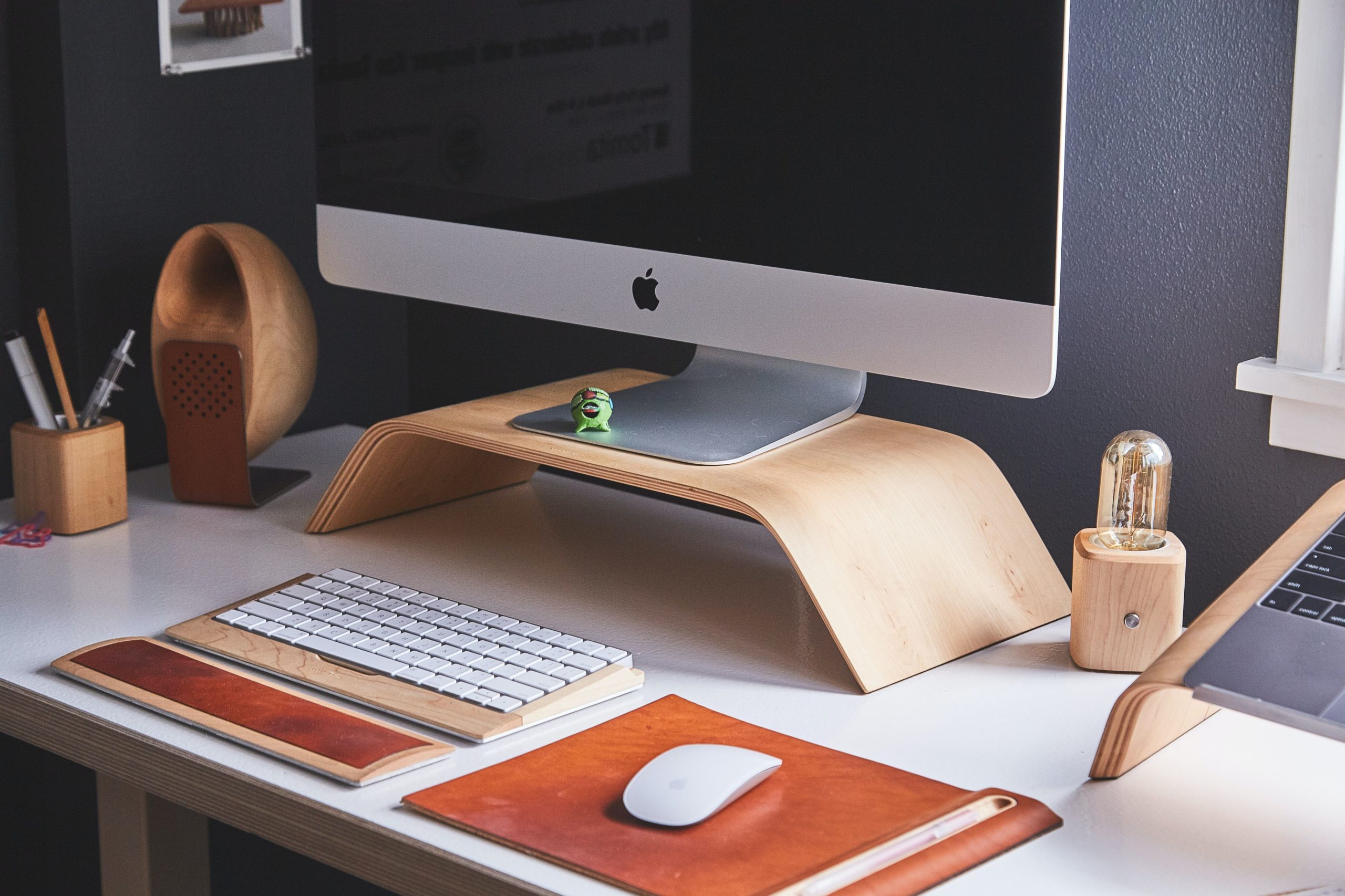 Keeping Your Home Office Organised With These 4 Tips