Ever since Georgie moved out of her stage 1 car seat, we’ve struggled to find a seat that works for her and the car. She originally upgraded to a seat that enabled her to be seated rear facing and she found that comfortable and we were reassured that it was deemed the safest way for her to travel at that stage.  The only downside was that this arrangement compromised on the space for the passenger front seat and we soon had to rethink how it would work when we were all travelling in the car.

We then opted to move the seat to be forward facing which freed up so much room but left us with one dilemma, the seat was situated in a bolt upright position, meaning that Georgie’s head would slump forward when she nodded off.

There didn’t seem to be any solution to stopping her head rolling forward and despite it looking very uncomfortable, it of course wasn’t very safe either.

When the boys were her age, they both had a Maxi-Cosi seat that reclined and we never ever had a problem with their heads lolling about. There is nothing worse than when I’m driving about alone with Georgie and there isn’t anybody to pop her head back!

This is where the top rated Maxi-Cosi Tobi car seat fits the bill perfectly. It can be used from 9 months up to 4 years (9-18 kg). 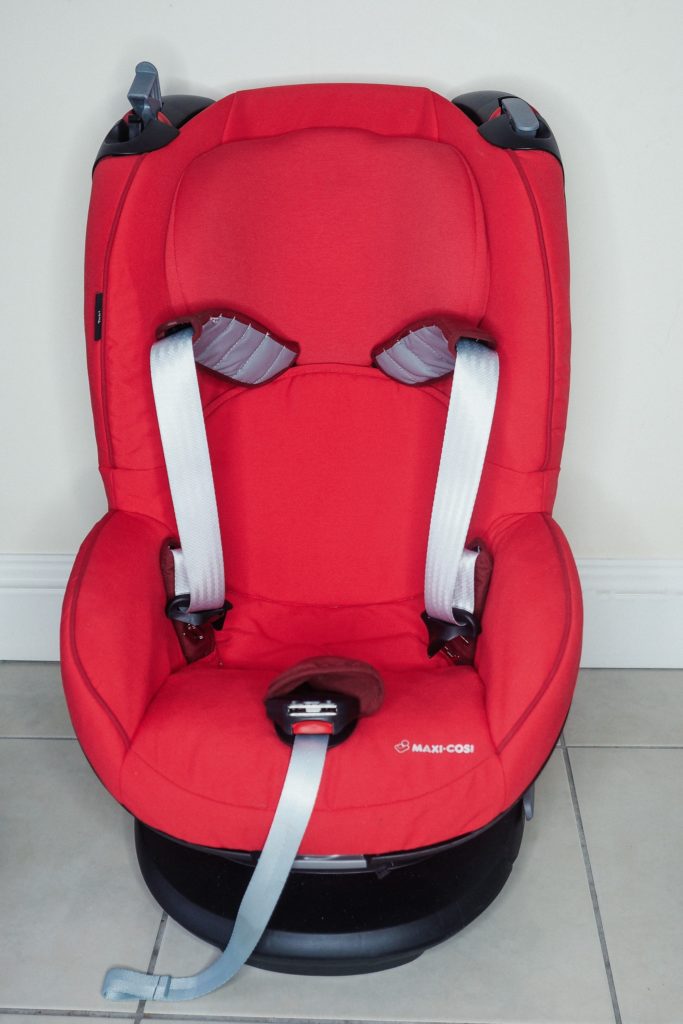 So what are the key features? 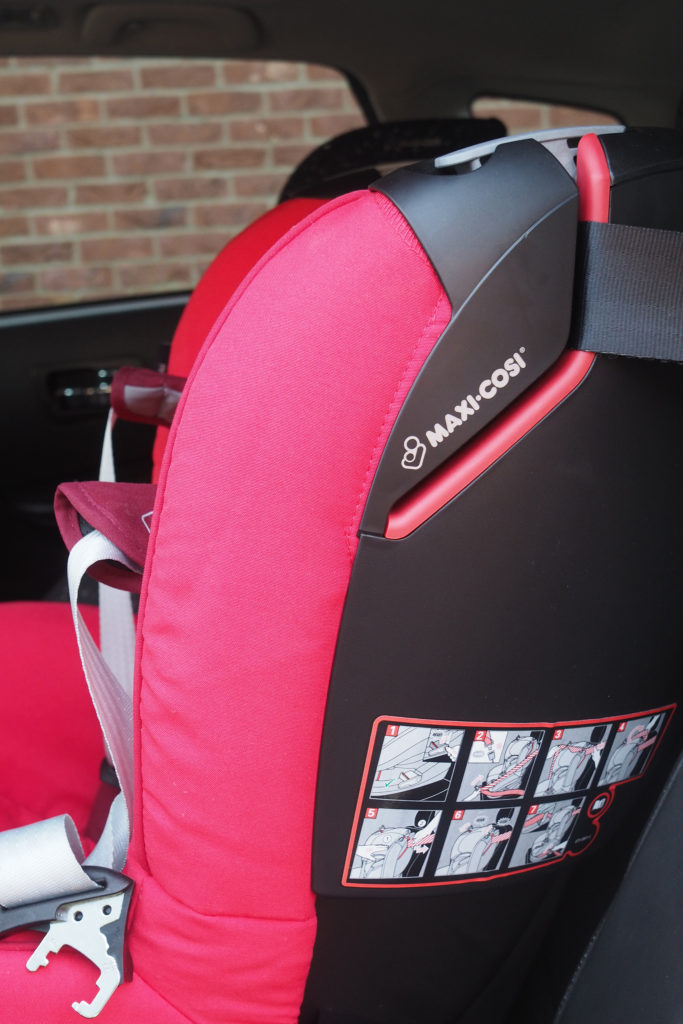 What do we love about it?

It’s really light! Our last seat was so heavy and it meant that moving it from it’s fixed position was a real faff.

It’s fixed using the seat belt (rather than iso-fix) and it super simple to install. I’m always dubious about how to fit car seats but this really is a piece of cake. You only have a few instructions to follow (which are located on the side of the seat) and it’s fool proof, honestly.

The straps are spring loaded making it really easy to place around their shoulders, particularly if they’re not keen on going into the seat.

Not only does it install quickly but it’s just as easy to whip out. Meaning that it’s easy to move from car to car, much like the ease of a booster seat.

The seat sits quite high giving Georgie a better view out of the window and she loves her new raised position.

The five point harness is childproof (for now). With Georgie’s last seat, she had worked out how to unfasten the harness (also five point) and it was becoming a real pain. Literally as soon as we’d pull up somewhere, she’d unclip the seatbelt and climb into the front seat! Luckily she didn’t do this while driving but it was only a matter of time before she did. The button on this harness fastener is much harder to push and as yet she hasn’t fathomed it. So it’s childproof for now. 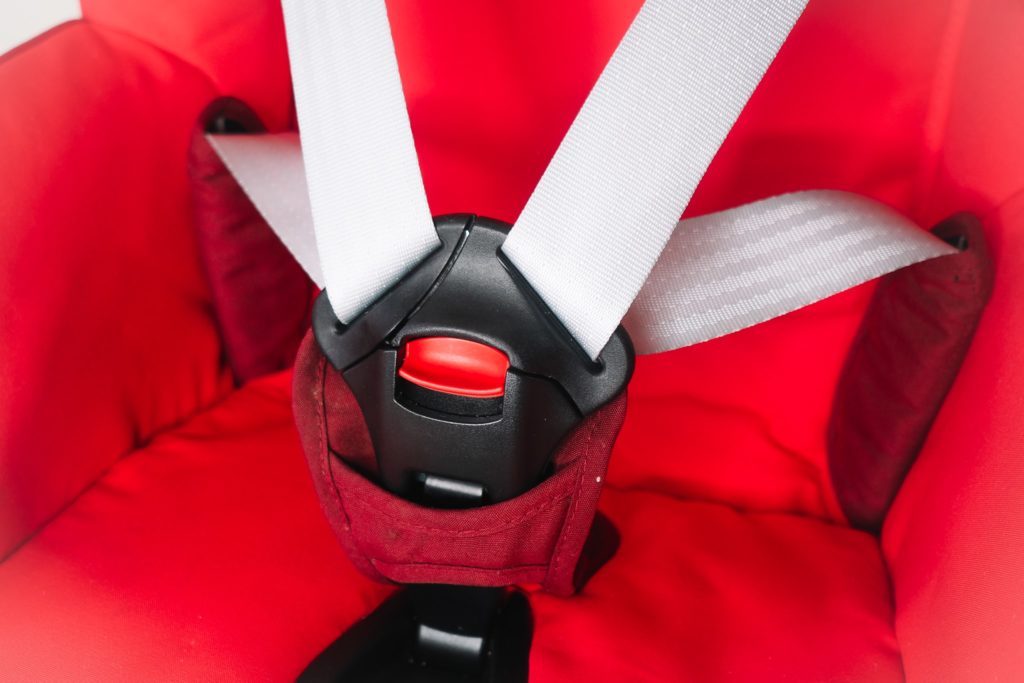 The harness sits comfortably on the shoulders and is easy to loosen and tighten as you need, depending on what they’re wearing.

Finally, the best feature by far is the fact that it’s reclineable! It has a few subtle recline postitions meaning that the head is fully supported when they fall asleep and the head support provides good cushioning. 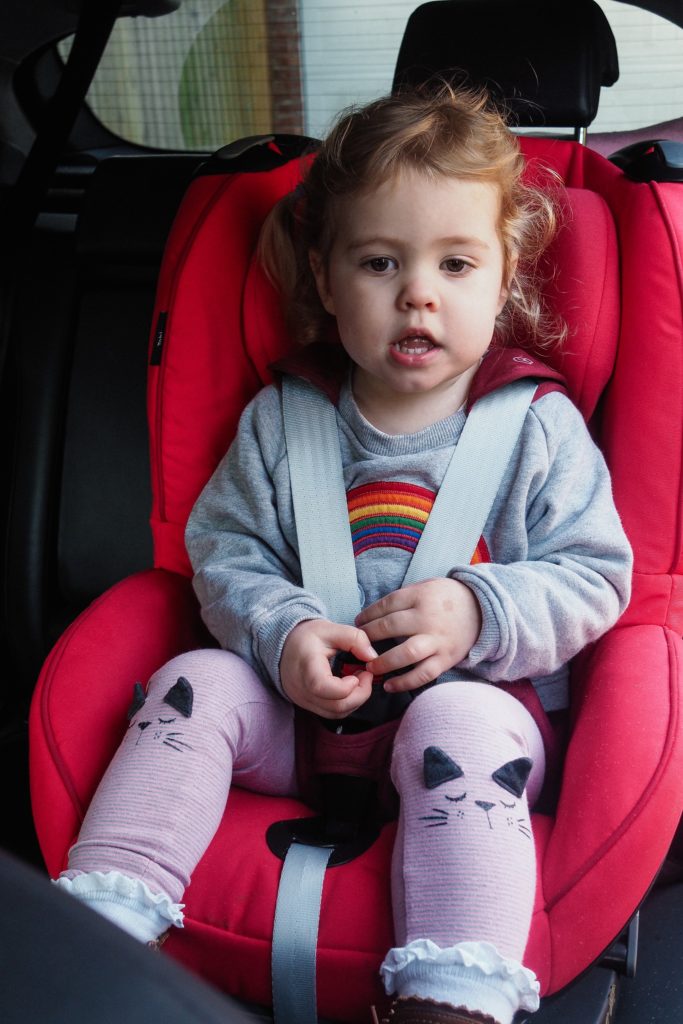 The seat belt needs to be fully extended before you start to install the car seat . You then start by looping the seatbelt throught the top slots (if you’re worried about losing the tension on the seatbelt, you can clip them at this point to secure the length of belt) and then bring it around to fix into the seatbelt base. Then you pull the remainder of the belt around the front of the base, where it sits flush against. By this point you will have run out of tension in the seatbelt and you simply clip the end of the belt (with the grey clips at the base) to secure that part. 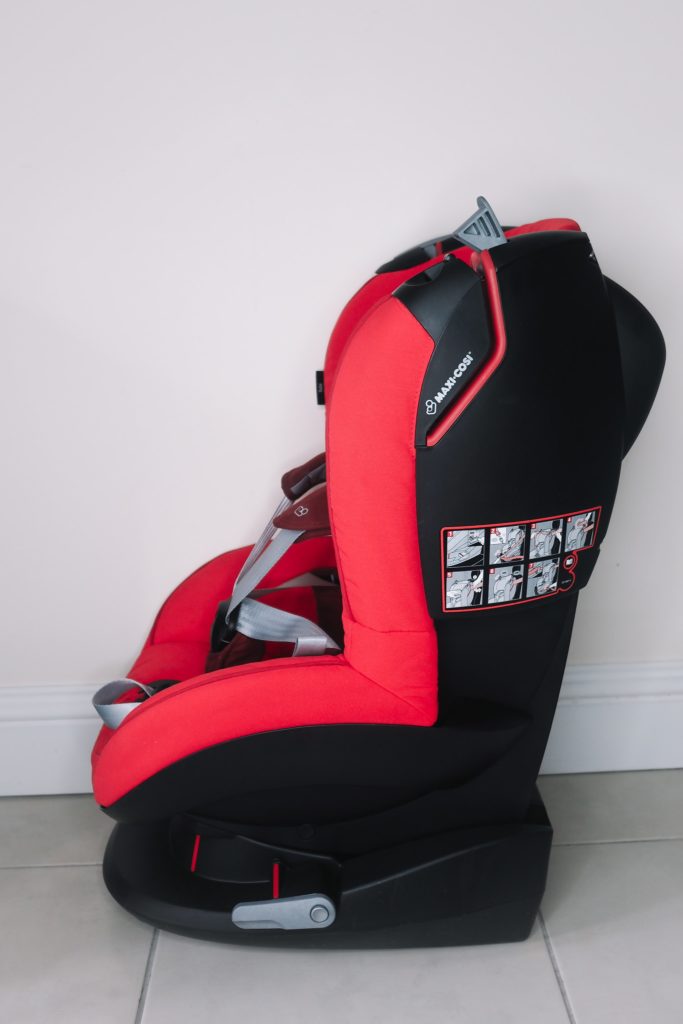 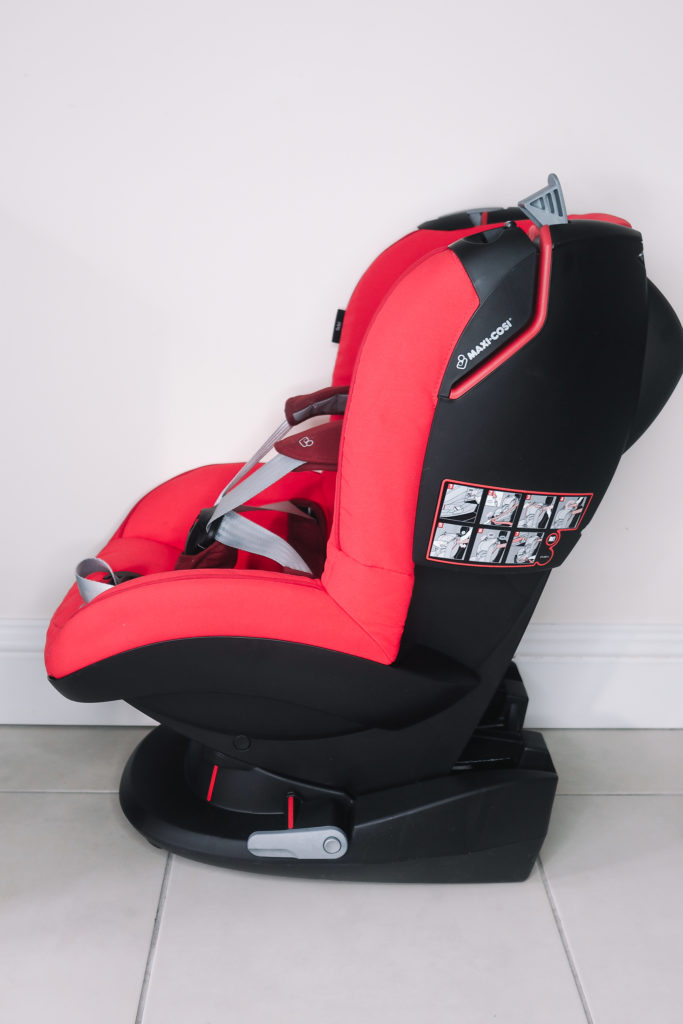 What isn’t so good

In all honesty? not a lot really.

I have to be careful that the harness straps don’t slide off Georgie’s shoulders and if it’s too loose, then she can pull her arms through. The fabric is nice and soft but I think an improvement would be to use fabric that is more stain and mark resistant or at least with a cover that is easier to remove.  Having said that, marks have come off easily so far and I appreciate that the fabric is more breathable as a result.

All in all, it’s just the kind of car seat that we were looking for to be used up until Georgie is aged 4, so we still have a fair bit of use out of it yet.

Nb. We were sent this Max-Cosi Tobi Car Seat to review but all views and opinions remain entirely our own.